August 28 started as another typical sun-drenched Sunday morning in Providenciales for Managing Director Urmas Kärner and his daughter Aleksa, but ended with treasured times that will go down in Grace Bay history. 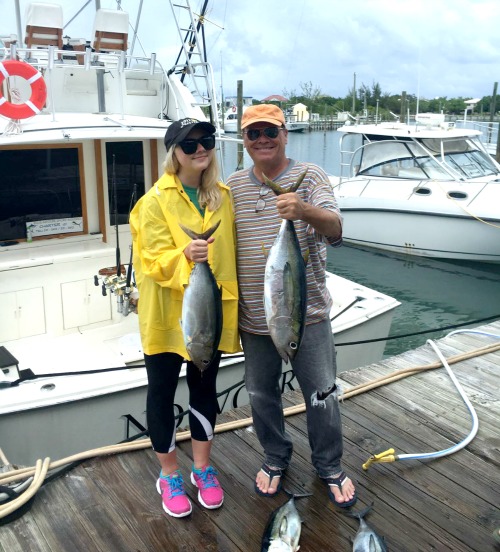 Catch of the Day

The father-daughter duo set off on the charter fishing vessel named “No Worries,” an appropriate name for their day of carefree Grace Bay fun.

After two hours of trolling in the deep blue waters, Urmas and Aleksa each had landed a tuna (pictured right). This later made for a memorable evening meal at Pavilion, where our resort’s Executive Chef Brad Townsend prepared their fresh fish to perfection.

The One that Got Away

After a lull in the action, Urmas announced he was donning his “lucky hat.” Just a few minutes later, he hooked into a fish that required three men to take turns in the fighting chair and struggle with the enormous sea creature. The ensuing battle lasted for the better part of an hour.

Finally, the 7-foot fish came into view within several feet of the boat, and Capt. Germaine Jennings identified it as a blue marlin. The captain estimated its weight at 700 lbs, quickly recognizing it as the largest fish he’d seen all year.

Before anyone could reach for their camera, the mammoth fish broke the line and disappeared. By law, blue marlin must be released back into the sea anyway, but the crew was startled at its abrupt departure.

Since the fishing rod’s “Bimini Twist” leader had spooled onto the reel, Capt. Jennings proclaimed this to be an “official” catch and proudly hoisted the “billfish” flag. Exhausted but triumphant, the fishermen returned to Providenciales’ Turtle Cove Marina and celebrated their victory. Despite the elusive photo, this was the fishing experience of a lifetime for Urmas and Aleksa.

Our Concierge Jasmine will gladly assist you with booking a half or full day fishing trip with the legendary Capt. Jennings. Urmas promises to lend out his lucky hat and recommends having your camera ready at all times!